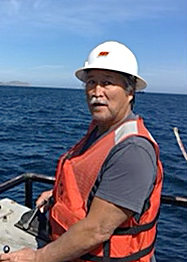 Asked if vaccinated: no

Kyler read a wonderful quote that his father would love: "This world is not my home, i'm just passing thru, my treasures are laid up beyond the blue."

Anthony was denied the love and attention of his family; was forced to take remdesivir, and was forced onto a ventilator, being told that it was his only chance for survival. The family was denied all visitation until being called in at the last minute when they that knew he was dying. They allowed mother, one son, and his sister to visit, while deriding the other family members all huddled together in a room somewhere else in the hospital. During this time, the nurse kept badgering them to remove him from the vent and let him go; they teased them with letting the whole family in to visit, if they would just remove the vent-they refused over and over again, and at that point the nurse refused to let the son return, even with the doctor's permission. Their choice to let God take care of their beloved husband and father caused them to miss being there with him at the end. The second son made another nurse feel so bad, that she allowed him to go in for TWO minutes, then was summarily escorted out of the ICU, and out of the hospital, by security. That day, Mr Anthony Victoria became another victim of the system, leaving a beloved wife and two sons, and a loving sister to carry on without him.

Days on a ventilator: : 9 days

Nurses "blackmailed" extended family with promise for all to EOL visit, IF they removed vent; otherwise no visits to other family members at all; son Kyler was given 2 minutes to say goodbye to his father, his best friend, and was then escorted by security from the ICU, out the front door of the hospital, along with all other family members. He died alone because of a hateful nurse.

Anybody Who knew Anthony Victoria Personally, knows that he entered through the small gate and the narrow road to our lord and savior Jesus Christ. Although Its been a painful nine months since his passing, We are delighted in joy to know, he is not in a better place, but the best place, HEAVEN!

Anthony Victoria worked his butt off his entire life to provide for me and our two sons. He worked two jobs for thirty years to give us all the things he didn’t have growing up as a kid. He was a devoted husband and a man of faith. He was an excellent father, because he was tough on our two sons. He introduced our sons to the lord and instilled morals and beliefs in them. On top of all that Anthony was the best Captain hands down. Ask anyone in long beach and Los Angelos harbor they will agree. Anthony could drive a boat with his eyes closed.

Billy Graham, one of the most renowned preachers to have walked this earth once said “the greatest legacy one can pass on to ones children and grandchildren is not money or other material things accumulated in ones life, but rather a legacy of character and faith.” My father definitely left my brother and I some very large shoes to fill when it came to having the highest of characters and greatest belief in faith. We will forever miss you dad and we love you.

They murdered my mother

Murder by Protocol and Lies