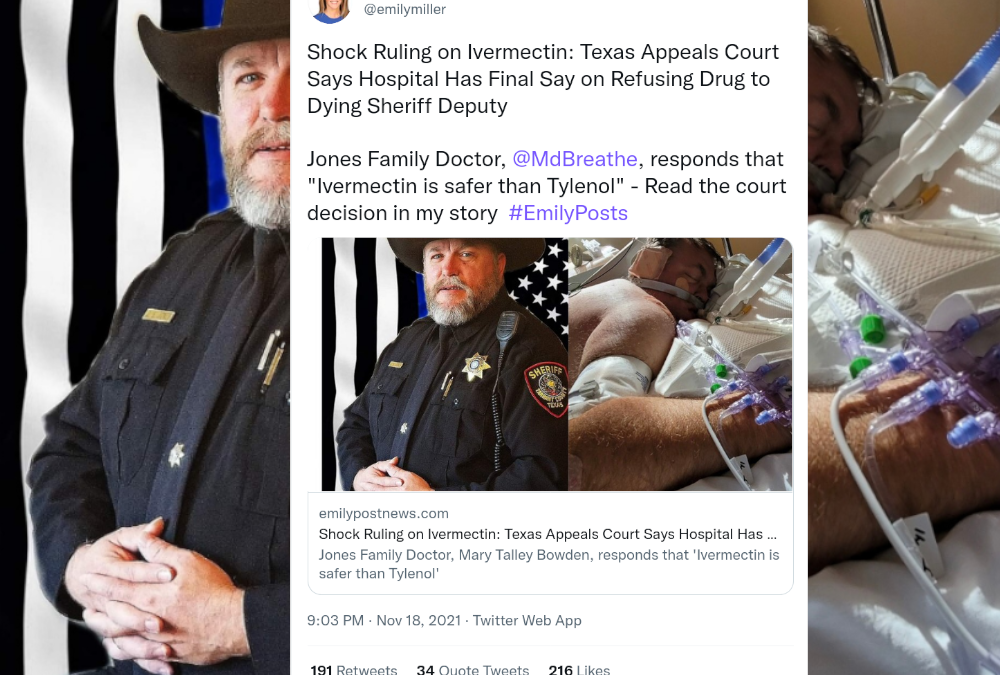 Hospital doctors won a big legal battle to stop a dying COVID patient from trying Ivermectin. A Texas appeals court ruled Thursday that it could not intervene in the medical decisions of health care providers. The lawyer for the Jones family, which lost in the case, said the opinion is “shocking.”

Sheriff Deputy Jason Jones is dying of COVID at Texas Health Huguley Hospital, and his wife Erin wanted a private doctor to administer Ivermectin. Now she wants her husband released from this hospital.

“I am hoping he can get the trach put in soon so I can get him out of there. Just worried with the chest tubes,” Erin told me after the court ruling. “I still have my faith. It will make Jason’s testimony that much stronger.”

To get caught up on this case, read my story today on GoFundMe removing the fundraiser for the Jones Family. Also read how the hospital called the police to stop Dr. Mary Talley Bowden from administering Ivermectin.

I spoke to Dr. Bowden after the ruling and she said it was disturbing, but she was not defeated.

“We are not giving up and are working to get Mr. Jones transferred to a hospital that cares more about human life and patient autonomy than politics and control,” said Dr. Bowden. She added that, “Ivermectin is safer than Tylenol.”

(Scroll down to read the court pleading for Dr. Bowden to administer the Ivermectin.)

Beth Parlato, the lawyer for the Jones family who wrote the appeal, was “shocked” by the court’s ruling.

“This is a horrendous opinion,” Parlato said. “It’s a badly written decision. They basically concluded that nothing in the law allows us to overrule the hospitals treatment decisions.”

Parlato is preparing to appeal the case to the Texas Supreme Court, but that will take longer than Jason can live like this.

Jones Family Doctor, @MdBreathe, responds that "Ivermectin is safer than Tylenol" – Read the court decision in my story #EmilyPostshttps://t.co/ilSSxuc8lt