George Washington wrote “For if Men are to be precluded from offering their Sentiments on a matter, which may involve the most serious and alarming consequences, that can invite the consideration of Mankind, reason is of no use to us; the freedom of Speech may be taken away, and, dumb and silent we may be led, like sheep, to the Slaughter.”

Thomas Jefferson wrote, “It is to me a new and consolatory proof that wherever the people are well informed they can be trusted with their own government; that whenever things get so far wrong as to attract their notice, they may be relied on to set them to rights.” 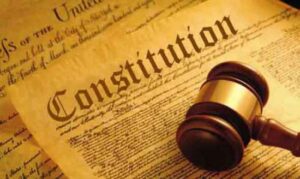 For two centuries, this has held true, and an educated electorate, informed by their free press, was able to advance the cause of democracy around the world by becoming an exemplar of the virtues of liberty, clearly laid out in the tenets of our constitution.

Now, with the advent of new technologies and Big Tech monopolies, this tried and true dynamic is being phased out in favor of “a Chinese version of freedom,” pushed by a ruling class who appear to have decided that China got it right. Chinese-style censorship on US social media platforms has eroded our fundamental right to freedom of speech. While Big Tech monopolies take refuge in their positions as private companies, they regularly consult with government entities, violating the letter and spirit of our founding documents.

The resulting dumbing-down of the electorate will have a cascading impact on every aspect of our democracy, until like “herd immunity,” “vaccine,” “fully vaccinated,” and “racism,” we will find that even the word democracy has been redefined.

The FormerFedsGroup is helping to take on one of the leading social media Goliaths and defending every American’s right to free speech.

Have You Been Censored On Social Media?

There are thousands of people who have been impacted by abysmal COVID policies, and their voices are being suppressed. If you would like to help document and archive stories from COVID victims and their families, please volunteer to assist this effort today.

The Assault On Freedom Of Speech

The word America has long been synonymous with a particular set of values, above all, the idea...